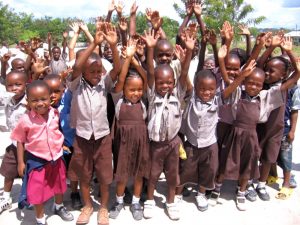 The OA founders first visited the Marilynn Primary and Nursery School in 2007 (shown above). The school had no more funds to continue construction or development. The above pictures show the poor status of the school’s facilities for learning. There were three unfinished classrooms where we taught. All 120 students and staff shared one toilet at the headmaster’s house because the lavatories remained unfinished. There was no well. Drinking water was carried to the school in a bucket and there were two cups. There was no lunch. School supplies and books were almost nonexistent. The teachers shared one set of dog-eared textbooks for the entire school. Their soccer ball was composed of many plastic bags laced together. Many of the students did not have uniforms and for those that did; their uniforms were in poor condition. Shoes were too big or too small. The orphan children struggled with all these deficiencies . They were amazing kids!

A dusty three-room school building has now grown to 10 classrooms, a dining/community hall, restrooms, and a computer lab. In addition, OA has installed electricity, a water well and tower, and provided a 400-book library, school supplies, uniforms, shoes, computers, science equipment, as well as desks, chairs, and textbooks. OA has fostered an environment where students can thrive. More than half of the students have parents who pay tuition, providing enough funds for the orphans to attend for free and for the school to be self-sustaining. In the 2012 National Examinations, the Marilynn School scored first in their Ward, including boasting the top scoring student out of 1,991 students. In the fall of 2013, the first class of the Marilynn Primary School graduated! The President’s Office of The United Republic of Tanzania awarded Orphans Africa’s Marilynn Primary and Nursery School with a “Certificate of Commendation” for being the “most improved Primary School in the year of 2016”.